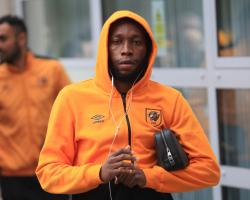 The DR Congo international, on loan from Dynamo Kiev for the season, was replaced by Oumar Niasse in the second half of Saturday's 1-1 draw with Burnley.

Abel Hernandez returned ahead of schedule from a hamstring injury of his own later in that game, giving Marco Silva's attacking options a boost.

Mbokani's absence was announced as part of an injury update on the Tigers' website which also featured news of defender Harry Maguire.

The 23-year-old played on against the Clarets after suffering a knee injury in the first half and Silva hailed his spirit and commitment.

The Portuguese manager also expressed hope the injury was just "a knock" and he appears to have got his wish.

"Following on from the injury picked up during Saturday's game against Burnley, Harry Maguire's knee has settled down well," the club's statement on Tuesday announced.

"The medical staff will continue to monitor Maguire in the lead up to next weekend's trip to Leicester City."

Fellow centre-backs Michael Dawson and Curtis Davies are not expected to feature against the Foxes but midfielder Evandro and winger Lazar Markovic are making good progress.

Markus Henriksen continues his recovery from a dislocated shoulder while young goalkeeper Will Mannion is to undergo knee surgery and will miss the remainder of the season.