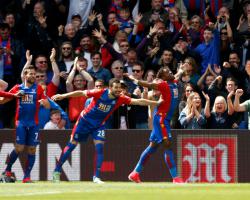 They struggled to recover from gifting Wilfried Zaha a third-minute goal, and will return to the Sky Bet Championship next season after this defeat left them four points from safety with only one fixture to play.

He also recognised the potential for the Selhurst Park crowd to grow nervous, but if either team had displayed a lack of composure, it was Hull.

Scarcely two minutes had passed when the erratic Italian defender Andrea Ranocchia's missed kick allowed Zaha directly through on goal, and from there the winger calmly finished beneath goalkeeper Eldin Jakupovic

As with Swansea's 2-0 victory at Sunderland on Saturday, it already appeared that by taking the lead the hardest part was done, and after a quiet period of play the home side added a second in the 34th minute.

Jason Puncheon targeted Benteke with his inswinging, right-wing delivery and the Belgian's powerful header, under minimal supervision from the Hull defence, had the beating of Jakupovic

Palace had no reason to play with ambition, knowing their visitors required a minimum of two goals, and defended with the organisation Allardyce has given them.

The Eagles continued to threaten on the counter-attack and the third goal was scored from the penalty spot by Milivojevic with five minutes left after Dawson tripped Jeffrey Schlupp in the box.

Hull, who will finish 18th, had begun the season with only 13 fit senior players, without a permanent manager and amid widespread predictions of relegation

Silva's contract expires at the end of the season, and it would seem that keeping him on board represents Hull's best chance of making an instant return to the top flight