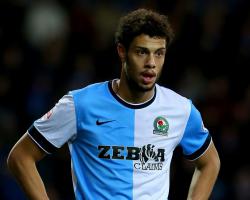 The Tigers were left frustrated when their attempts to prize Jordan Rhodes away from Ewood Park with an eight-figure sum were rebuffed during the latter stages of the summer transfer window.

Steve Bruce eventually signed Uruguay international Abel Hernandez but both he and fellow striker Nikica Jelavic could now be out for six weeks with injuries.

That means Bruce will scour the market for attacking reinforcements again and Bowyer confirmed Hull are interested in Gestede, who notched 25 goals in the last calendar year.

And despite ignoring Bruce's advances for Rhodes just a few months ago, Rovers may be tempted to cash in on his strike partner given they will spend this month under a Football League-imposed transfer embargo.

"There has been interest from several Premier League clubs in Rudy

Does it surprise me? No, it doesn't.

"With all due respect, 12 months ago not many people had heard of Rudy Gestede

Now he's burst on the scene and he's been a great bit of business by us.

But I am aware of the financial situation and that decision would be out of my hands."

Towering striker Gestede, 26, joined Rovers permanently from Cardiff in a cut-price deal last January and the Benin international has since averaged better than a goal every other game.

His capture, just 18 months on from Rhodes' ÃÂ£8million switch from Huddersfield, represented a new transfer philosophy for Rovers, who have spent much of Bowyer's tenure offloading high earners and bringing in bargain buys.

"The model we went down when we first started 18 months ago was to start again, get young players through with hunger and desire that hadn't quite achieved the heights of senior, experienced players and work with them, develop them and improve them," Bowyer explained.

It's something I have totally been aware of

"We are not the only ones

For people to bury their head in the sand and say we shouldn't become a selling club....they are being naive."

Blackburn, like Championship rivals Nottingham Forest and Leeds, are not permitted to spend any transfer fees this month but any money accrued from Gestede's sale would go a significant way to ensuring the east Lancashire club do not fall foul of the Football League's rules again in the summer.

So while the club's owners, the Venky's family, felt the need to veto Rhodes' possible exit, Bowyer acknowledges the goalposts have moved since.

"The Financial Fair Play has kicked in and there's the embargo now," he added.

"As a result of that we're in this embargo because of the finances that went on before our time here.

"As a club it's up to us to address that so I think that's the big change from the summer."