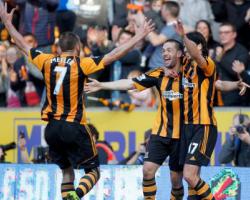 Tigers captain Curtis Davies headed his side into a 68th-minute lead after rising highest to meet a Tom Huddlestone free-kick, before Meyler supplied a cool finish four minutes later after chasing down a punt upfield from George Boyd.

And the Black Cats' agony was complete in the 75th minute when Lee Cattermole, experiencing an afternoon to forget, played a shocking back-pass which left the lurking Matty Fryatt with the simplest of chances to score.

It could have been worse for the visitors, who had to rely on goalkeeper Oscar Ustari saving Sone Aluko's 33rd-minute penalty in order to keep them level at the end of a largely forgettable first period.

Sunderland boss Gus Poyet will at least now be able to focus on his side's battle to stay in the top flight after the distraction of their knockout heroics, which saw them lose 3-1 to Manchester City in the Capital One Cup final at Wembley last week.

The Uruguayan made six changes to his final line-up, including a rare start for Argentinian striker Ignacio Scocco

Bruce's men, keen to atone for their 4-1 humbling by Newcastle last week in a game totally overshadowed by Pardew's touchline antics, started well and hit the top of the woodwork with a cross-shot from Maynor Figueroa after just three minutes.

Cattermole's dismal day began on a downer when he became embroiled in a furious spat with former team-mate Ahmed Elmohamady after the Egyptian fell heavily under his 12th-minute challenge.

Referee Craig Pawson took no action on that occasion, although Cattermole - sent off in the equivalent league fixture in November which Sunderland finished with just nine men - was booked on the half-hour for an innocuous-looking challenge on Meyler.

The visitors' chances were few and far between, Scocco spooning a Phil Bardsley cross over the bar in the 19th minute as Hull - weakened by the absence of cup-tied pair Nikica Jelavic and Shane Long - dominated despite a distinct lack of cutting edge.

Sebastian Larsson's foul on Aluko gave the Tigers the chance to go ahead from the spot but Ustari guessed right and dived low to his right to gather Aluko's dismal spot-kick.

Ustari got down to stop another Aluko chance towards the end of the first period and the start of the second half was even worse, with neither side apparently willing to make good on their desire to avoid a replay at any cost.

But then came the visitors' late collapse, starting with John O'Shea's foul on Fryatt on the right flank which presented the set-piece from which Huddlestone's inch-perfect delivery found the head of Davies.

And Sunderland's misery was complete on 75 minutes when Cattermole's blunder allowed Fryatt to pick his spot past Ustari, and seal the Tigers' trip to Wembley.