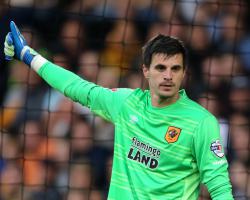 Jakupovic, 31, appeared in both the semi-final and final of the Sky Bet Championship play-offs at the end of the season as cover for the injured Allan McGregor.

Hull beat Sheffield Wednesday 1-0 in the Wembley final to secure promotion to the top flight for the second time in four seasons.

"Eldin Jakupovic has extended his stay at the KCOM Stadium for a further two years after agreeing terms on a new deal," the club said in a statement

"Although the club had initially exercised its option to offer the goalkeeper a one-year deal at the end of the 2015/16 season, negotiations began immediately to secure Jakupovic on a longer-term contract with a two-year deal now agreed."

Jakupovic is the Tigers' longest-serving player having arrived from Greek side Aris Salonika in July 2012.

He has made a total of 28 appearances for Hull and had two loan spells at Leyton Orient during the 2013/14 season.