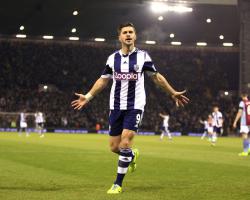 Long was close to signing for the Tigers on transfer deadline day in September, arriving at the club's training ground via private jet from Dublin after an offer was accepted by the Baggies.

But the Midlands club pulled the plug when they failed to secure a deal for Chelsea's Romelu Lukaku, who instead opted for a loan at Everton.

Hull boss Steve Bruce has not hidden his ongoing interest in the Republic of Ireland forward but reports that an agreement had been reached and a medical was due on Thursday appear wide of the mark.

An official statement read: "Contrary to reports in the media this morning, the club confirms that it has not reached any agreement with West Bromwich Albion over the transfer of striker Shane Long, and as such will not be conducting a medical with the player today."