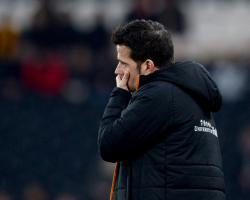 Less than a week after being announced as the surprising successor to Mike Phelan, the 39-year-old is preparing to take the Premier League's bottom side to a team on an eight-match winning streak.

As if facing Jose Mourinho's side was not enough, Silva approaches Hull's first-ever semi-final appearance in the competition with an eye-watering list of defensive issues.

The Portuguese may have got his reign off to a winning start against Swansea, but Saturday's FA Cup third-round tie laid bare their squad deficiencies as Tom Huddlestone and Jake Livermore ended the 2-0 victory in central defence.

"We finished this game with our backline having a midfielder as a right-back, two midfielders like centre-backs," Silva said, who deployed David Meyler as a makeshift full-back.

"It is not normal at the level where we are.

"For all these things, for the situation we have in the table, it is very important to give confidence for the people, change the atmosphere here and I think it is important for us."

Michael Dawson was forced off against Swansea with a shoulder injury that needs assessing, while Harry Maguire is another doubt for a match that fellow centre-backs Curtis Davies and Alex Bruce will miss through injury.

Ahmed Elmohamady's departure for the African Nations Cup and Moses Odubajo's serious knee injury means Meyler may again be deployed at right-back, although on the other flank Josh Tymon and Andrew Robertson are both available.

The latter was one of few to have heard of Silva before his shock appointment at the KCOM Stadium thanks to former Dundee United team-mate Ryan Gauld.

Attacking midfielder Gauld played under the new City boss at Sporting Lisbon and spoke positively about a manager who has made a good early impact on Robertson.

"My first impressions have been very good," the Scotland left-back said.

"Since the day he came in, it has been a little bit hectic because he came in Thursday and we had the game Saturday.

"He was obviously trying to get his ideas across, we knew he couldn't get them all across by the time Saturday came

We were all realistic.

"He just said to go into it with an open mind and if we do that he can improve it and all the players believe that.

"It's never nice when people lose their jobs, especially the good people who did, unfortunately, but that's the way of the football world

We all know that.

"I suppose we never really had that change under Mick

He kept most of the staff the same - now there is completely new people.

"It is the first time I have ever worked under a foreign manager so it is a wee bit different, but all the players are buying into it.

"All his ideas are coming across well and hopefully we can show that in the coming games."