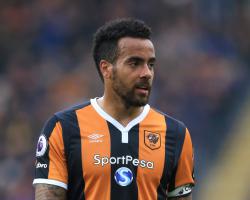 Huddlestone was shown a straight red card by referee Paul Tierney following his challenge on Idrissa Gueye midway through the second half.

"The Tigers have appealed against Tom Huddlestone's red card in Saturday's match against Everton," the club confirmed on their official website

"If the appeal is unsuccessful, Huddlestone will miss the Tigers' forthcoming Premier League fixtures against West Ham United, Middlesbrough and Manchester City

"The club will hear the outcome by the end of the week."

Hull were trailing 1-0 when Huddlestone was given his marching orders and went on to lose 4-0.

The Tigers are currently third from bottom, three points from safety, having won only one league game on the road this season.