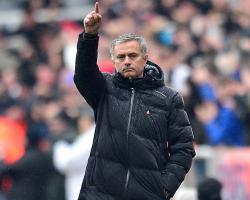 football.co.uk/match_reports/hull_chelsea_3632011-9.shtml">Hull 0-2 Chelsea: Match Report - view commentary, squad, and statistics of the game as it happened.

Eden Hazard repaid Jose Mourinho's unflinching faith with the decisive goal as Chelsea went top of the Barclays Premier League with a 2-0 victory at Hull.


With Paris St Germain reportedly ready to make Chelsea an eye-watering offer for the Belgian playmaker, Mourinho said this week he would not even entertain a B#100million bid.


And he underlined his increasing value to the Blues with a skilful 57th-minute effort that broke down Hull's otherwise impressive resistance before Fernando Torres made it safe three minutes from time.


Hazard, who cut into the box before finishing emphatically into the bottom corner, is Chelsea's top scorer with nine league goals and PSG may be advised to look elsewhere if they are in the market for January additions.


Torres was less influential but was still able to celebrate his 200th Premier League appearance by finding the net, Hull having opened up in pursuit of an equaliser.


The result was particularly hard on home keeper Allan McGregor, who put in a fine shift capped by one of the saves of the season from Oscar with the game still goalless.


A series of sloppy passes characterised the opening minutes, with players from both sides surrendering possession cheaply.


Tom Huddlestone was a notable exception in midfield, showing a calmness on the ball that helped Hull settle quickest.


It was the hosts who had the first shot of the game in the seventh minute, but Ahmed Elmohamady's effort was never likely to trouble Petr Cech.


The Egyptian saw plenty of the early action, three times beating Ashley Cole for pace down the right wing without ever finding a cross to match.


Chelsea's first real opportunity saw Torres spring the offside trap but by the time he had set himself to shoot Alex Bruce was back to make the block.


By and large, though, it was Hull doing the best work and they will have been disappointed not to have scored before the break.


Jake Livermore had one decent effort from distance - denied by Cech after Yannick Sagbo had gamely held the ball up in the corner under close attention from Gary Cahill.


But it was Sagbo himself who had the Tigers' best chance.


John Terry was the culprit, sending a reckless pass across his own area only for Livermore to partially intercept and send the ball spinning towards Sagbo.


The Ivorian shot first time from 10 yards but missed the target and spared the Chelsea captain's blushes.


The visitors were stronger after that and were only denied a goal of their own by McGregor's remarkable save.


Ramires' deft chip gave Hazard room to place his cross from the byline and when it reached Oscar close to to penalty spot, the Brazilian seemed certain to convert.


In truth he did little wrong, shooting powerfully towards the roof of the net, but McGregor reacted superbly to divert the ball over the crossbar.


The Scotland keeper was required again just before the break when David Luiz's swerving free-kick threatened to creep under the crossbar and the half-time whistle came as a welcome break for the hosts.


Hazard emerged as the man most likely to get Chelsea on the scoresheet as the second period began, beating two men on his way into the area and winning a corner before helping earn a dangerous free-kick.


Luiz aimed for the near side of goal but again found McGregor alert to the danger.


Hazard eventually took the responsibility himself.


Luiz and Cole played him in after a neat combination on the left and the Belgian produced what is fast becoming his trademark finish.


He cut inside twice to create his preferred angle, wrongfooting the Hull defence and leaving Bruce sprawling, before clinically finding the bottom corner.


The game was not without entertainment in the final half hour, but there was an unavoidable sense that Hazard's effort had settled things.


A Huddlestone free-kick was Hull's likeliest chance but came to nothing, while Chelsea had plenty of possession in the final third and should have made life easier on themselves.


Willian, in particular, sparked into life and began picking holes in the Tigers defence.


Oscar was denied a near-certain goal for the second time in the match when Curtis Davies deflected his close-range effort over but Torres did make sure in the 87th minute.


He had enough pace to jockey Bruce out of position as he bore down on goal and finished crisply to secure the points.