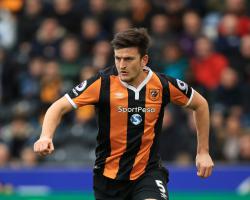 Maguire needed lengthy treatment during last week's home draw against Burnley before going on to win rave reviews from head coach Marco Silva with another commanding display at the heart of defence.

Silva went further this week by declaring Maguire is an England international in waiting and said he hopes the 23-year-old will be included in Gareth Southgate's squad for the friendlies against Germany and Lithuania later this month.

"We'll see (on Friday)," Silva told a press conference when asked if Maguire would be fit to face Leicester at the King Power Stadium

"We have one more training session to see, but I think he'll be available for the match."

Maguire, who made one appearance for the Under-21s against Northern Ireland in 2012 while still at hometown club Sheffield United, has been tipped by Silva to become the Tigers' first full England international

"Of course it's not my decision, but first of all I hope so," Silva said

"What I've seen of Harry in the last two months, I think he'll play as soon as possible in the national team.

Maybe he's not listened the last few years, but I'm sure he'll have a great career.

"Of course, he needs to improve many things, the position and to understand better some moments of the game.

"But I believe he will have a great career."

Hull, who have taken eight points from six Premier League games under Silva, are three points behind Leicester in the table.

With a home game against another relegation rival, Swansea, following at the KCOM Stadium next week, the trip to managerless Leicester carries huge significance.

Striker Dieumerci Mbokani (hamstring) and Evandro (calf) are out, but Silva will be boosted by the return from suspension of Sam Clucas, while winger Lazar Markovic is also available after a knock ruled him out against Burnley.

Leicester responded to the sacking of Claudio Ranieri with Monday night's 3-1 home win against Liverpool.

The Foxes' vastly-improved display raised eyebrows among many pundits, who have questioned why their players have fallen so short under Ranieri this season.

But Silva insists Leicester's performance came as no surprise to him.

"No I wasn't surprised," he added

"Leicester are a good team

They have very good players as well

"It's impossible for us to forget what they did last season and if we pay attention during this season as well, against very good teams at home they play very well.

"Not only against Liverpool

I remember against (Manchester) City they did the same and for me it was no surprise.

"The players had listened to many things (said) about them that were not good and they tried to prove during the 90 minutes that it's not true.

"I saw a team with a big motivation during the last match and I expect the same against us."