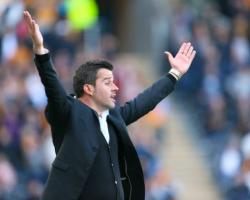 Hull City boss Marco Silva is set to be handed a timely boost ahead of Saturday's trip to Stoke City, as the Tigers seek to claim three points in their bid to stave off relegation.
Harry Maguire is expected back after his knee injury, while Omar Elabdellaoui and Dieumerci Mbokani are also hoping to pass fitness tests ahead of the Premier League clash at the Bet365 Stadium.
Tom Huddlestone will also be available for selection after serving a three-match suspension.ÃÂ