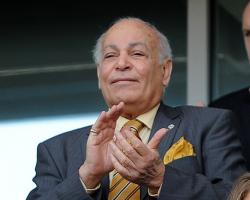 The City Till We Die campaign group is confident any poll will result in a "no" vote, and hope that will be the end of the matter despite the owner's stated intention to walk away if he does not get the answer he wants from the FA.

Spokesperson Mark Gretton said: "We have said from the start, this has not been an anti-Allam campaign, and we have taken a lot of care to make sure it hasn't been

We are more than happy to work with them.

"If more revenue is needed at the club - and we recognise absolutely we need to grow the brand, we would be delighted with that.

"In many ways, the Allams have been excellent owners of our club and whatever happens, we have a lot to be thankful to them for.

"When they stepped in, the club was in a parlous position

It's been the issue of the name-change which has caused the problem.

That's why we welcome a season ticket holders' poll.

"If we can get a popular vote against the name change, we are not going to crow about it, we have no need to.

"Hopefully, he would just abandon the plan and we could say, 'Well done for being the bigger man'

We'd be delighted about that and we could start afresh."

The Tigers board released a statement on Tuesday afternoon claiming their application had been pre-judged.

It said: "The club is disappointed with the timing of yesterday's announcement made by The FA.

"We feel we have been prejudiced right from the outset

The FA introduced a new policy to handle our application on the back of consultations with the City Till We Die group, and we therefore feel that our application was already pre-judged.

"This feeling has been reinforced with yesterday's announcement, as the club feels this will further prejudice the forthcoming ballot of season pass holders.

"However, this is now the time for the silent majority to come forward and support the club's aspirations

Details of the ballot will be released to season pass holders within the next 48 hours."