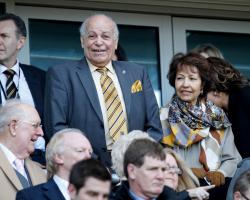 The FA Membership Committee has reportedly advised the FA Council to reject Allam's proposal, which he claims is for commercial reasons.

The FA did not immediately comment on the reports and the FA Council is not due to make its final decision until early next month.

Allam's quest to re-brand the club as Hull Tigers met with a furious response from fans' groups and led to a war of words with Allam, who vowed to walk away from the club if his move was not approved.

The Football Supporters' Federation hailed the reports on Monday and praised the campaign waged by the club's supporters.

FSF chief executive Kevin Miles said: "This is undoubtedly the right decision and credit should go both to the FA and to Hull City fans, who led a tremendous campaign.

"The fans' groups and fanzines who came together under the City Till We Die banner have protected their club's heritage and 110-year-old name with great dignity.

"The FA's decision should also serve as a warning to other owners - such fundamental changes to a club's identity should not be made without the support of the fans."

Allam reiterated his threat to quit the club at the weekend, but his son, vice-chairman Ehab Allam, said a formal rejection by the FA would not stop him pushing for the change in the long-term.

Ehab Allam told BBC Radio Humberside: "The proposed name change is not about a quick win

It is a long-term change."