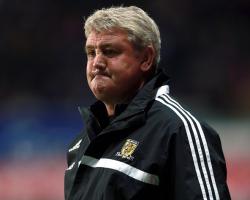 Owner Assem Allam wants to change the team's official name from Hull City AFC to Hull Tigers, incorporating their nickname in a bid to attract greater commercial interest from overseas.

The idea has been greeted with opposition by many fans, with protest groups formed and frequent chants of 'City Til I Die' at home games.

But Allam has forged ahead and has lodged an official request with the FA to complete the name change in time for next season.

The governing body must sign off on the plan for it to go ahead and are currently accepting submissions from interested parties ahead of a decision - possibly as early as next month.

Dyke insists all sides will be heard but believes the experienced Bruce is a voice that carries considerable weight.

"It needs FA permission to change the name and the FA Council will eventually make the decision. There's been a request and the FA are considering it," Dyke told the Yorkshire Post.

"Obviously, there are a lot of fans who made their thoughts clear they don't want it. We will be taking everything into account and we'll see. Steve Bruce does the manager's job and he's done it well in a few places and he's done a brilliant job at Hull.

"I'd be interested to know if it bothered him or not."

Bruce has attempted to play peacemaker in the row for much of the season and has vowed not to speak publicly on the matter until a verdict is reached.

His past pronouncements on the subject hint at a deference to Allam's wishes, though, with Bruce particularly keen to underline the level of the Egyptian's investment in the club as well as his charitable work in the community.