Defeat may put players off - Bruce 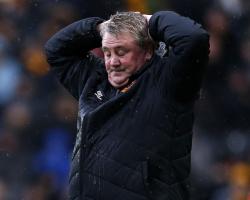 But, after goals from Remy Cabella, Sammy Ameobi and Yoan Gouffran gave the visitors the simplest of wins, Bruce said he would not be surprised to find either player having second thoughts.

Bruce said: "Both (the deals) are up to the players themselves, and, with the position we are in at the moment in the bottom three, we are not really endearing ourselves to the two players.

"The fee is agreed (for N'Doye) but there is still a lot of work to be done and that goes for Lennon too - but we hope we can bring the pair of them in.

"It would certainly add to our squad but even if we don't I am still confident the squad we've got can avoid going back down into the Championship."

Bruce blasted his side's second-half performance after an encouraging start in which Michael Dawson and Curtis Davies both came close to putting the hosts ahead.

Individual errors were responsible for gifting Newcastle their first two goals and Bruce acknowledged: "We simply have to stop gifting people goals like we have done in the game today.

"We made an individual mistake from which they scored and up until then I thought we were the better team - then in the second half we have made a catalogue of errors for the second goal.

"We need to show resilience and a bit more determination to try to rectify the situation, but if we're honest after the second goal it turned into one of those horrible afternoons you can all do without."

The result provided a dream start for Newcastle head coach John Carver, who was handed the job until the end of the season earlier this week.

But Carver now faces a "15-game season" to turn his dream job into a longer-term appointment, with club officials still expected to look elsewhere for a successor to Alan Pardew

Carver said: "I want this job and have all re-focused on what is really a 15-game season.

Everybody's re-focused because they know I am now the head coach and I hope we are going to go forward."

Carver went on to pay tribute to top scorer Papiss Cisse, who completed his long-haul return from the African Nations Cup late on Friday night and made a brief appearance off the bench with the game already won.

"We got him on a train and a plane and he got here eventually," Carver said

"He might have been a little bit fatigued, but I wanted to get him on the pitch because he had travelled and made the effort to get here

It shows you that everybody wants to be a part of it and that is a good thing."