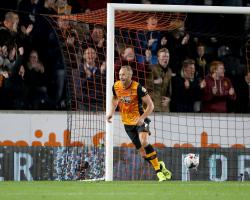 Livermore managed 69 minutes in his first appearance since May, when he was suspended following a positive cocaine test, and played his part as Steve Bruce's side knocked over their Barclays Premier League opponents.

But it was his fellow midfielder Meyler who grabbed the winner, turning home from a matter of centimetres after Shaun Maloney's header was palmed across goal just before the break.

Livermore, who was spared a major ban by the Football Association due to exceptional personal circumstances, was welcomed with a roar when his name was read out and cheered from the field when he made way for Sam Clucas.

Swansea were responsible for 10 of the 19 changes on the team-sheet but their second string had enough chances in the first 45 minutes to seal the tie.

They were mostly guilty of sloppy finishing but were also denied twice in a few seconds by the post and a gallant goal-line slide from Curtis Davies.

There was a slice of luck involved in the latter, with Davies a late addition to the Hull XI following an injury to Alex Bruce.

The game was wide open from the off, with Swansea close to scoring inside two minutes.

Portuguese striker Eder edged in front of his marker to meet Franck Tabanou's cross six yards out but his connection was messy and the ball looped harmlessly over.

Leon Britton and Meyler then traded 20-yard efforts, the Hull man's much the more threatening though not enough to catch out Kristoffer Nordfeldt.

Swansea also saw Matt Grimes head over when Hull failed to pick him up at a corner but it was a mixture of fortune and brilliant anticipation that kept Hull afloat in the 17th minute.

Goalkeeper Eldin Jakupovic dallied on the ball, allowing Eder to charge down his kick, only to see the ball bobble against the post.

A goal nevertheless seemed inevitable as Eder rolled a pass to Gylfi Sigurdsson, who rounded Jakupovic before sliding his shot at an empty net.

Davies had not given up hope, though, and flung himself across the goal-line to make a remarkable block.

At the other end there were occasional warning signals, with some slack passing from the back keeping Hull interested.

Yet it was still a shock to see the Tigers take the lead four minutes before the break.

Ahmed Elmohamady's near-post cross was well won by Maloney, whose header drew a smart reaction save from Nordfeldt

Yet the Swede could only parry the ball across goal, where Meyler waited to apply a finishing touch

A clumsy foul by Jordi Amat gave Hull an early sight of goal as the second period got under way, but Maloney's free-kick was comfortably saved.

Scotland international Maloney had been moved to a more central attacking position at the interval and the shift soon saw him more involved in proceedings.

With Hull increasingly comfortable, Swansea boss Garry Monk looked to his bench and came up with Jonjo Shelvey and Bafetimbi Gomis, who replaced Grimes and Eder.

Livermore was taken off with 21 minutes to play and his night ended as it began, with a rousing ovation from the KC Stadium.

Tabanou was next to make way, hobbling off the field for Kyle Naughton, and the rash of changes saw the game take on a scrappy feel.

That suited Hull just fine and they happily sat back in a congested midfield.

Kyle Bartley came closer than anyone to levelling matters in the 77th minute but his header was blocked on the post by Andy Robertson.