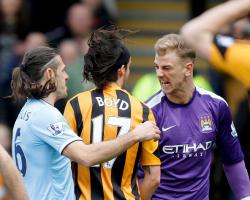 But the win was tarnished by a 69th-minute clash between Hart and Boyd after the Hull man fell under Hart's challenge in the box, with both men squaring up and a suggestion that Boyd may have spat in the goalkeeper's direction.

The Football Association will wait to see the referee's report on Monday before deciding whether charges will follow over the incident - which saw only Hart cautioned by referee Lee Mason - but while neither manager was aware of the specific charge against Boyd, they shrugged off the broader incident.

Pellegrini said it was "impossible" to see it properly from his position on the touchline, while Bruce described it as "handbags" before launching an impassioned defence of Boyd over suggestions he had dived in search of a penalty.

Bruce added: "There is a difference between simulation and diving, and trying to get out of the road

That's what Boyd is trying to do - nobody's going to stand there with Joe Hart coming at him."

The incident took the shine off a sturdy performance by Manchester City, who bounced back from successive defeats to Wigan and Barcelona to grind out a victory which, in light of Chelsea's demise, could prove crucial in the title race.

Kompany was dismissed for clearly preventing Jelavic from having a clean run on goal, although Pellegrini maintained referee Mason ought to have already pulled play back for an earlier foul by the Hull man.

If it looked like being another bad day for City the concern only lasted four minutes until Yaya Toure fed Silva, who curled a delicious left-foot effort past Hull keeper Allan McGregor to give his side the lead.

Bruce conceded that City's changed tactics in the wake of Kompany's dismissal led to the Tigers' game-plan going out of the window - and led to a frustrating afternoon for the hosts in which City soaked up pressure and relied chiefly on the counter-attack.

Bruce said: "The game-plan went out of the window after 10 minutes

We just didn't have the quality to break them down, but I have to say City defended very, very well and they scored a wonder goal."

Pablo Zabaleta could have increased City's lead with a rising effort which clattered the underside of the bar and Hull's frustration was evident in a rash challenge by Ahmed Elmohamady on Silva, which earned the Egyptian a booking.

Tensions rose in the 69th minute when Boyd tripped over Hart's challenge in the box, leading to the furious exchange during which the pair went head to head, with Hart clearly angry over what he saw as Boyd's bid to win a penalty.

Bruce admitted Mason had got the decision "spot on", but was more convinced by a second penalty shout for Boyd two minutes later, when he crumbled under the challenge of Fernandinho in the City box.

City sealed their win in the final minute when Silva's ball split the Tigers defence and Dzeko ran on to calmly slide the second past McGregor and end a difficult week for City on a high.

Midfielder Javi Garcia, who dropped back into central defence after Kompany's dismissal, believes the week's events will allow his side to fully focus on overhauling Jose Mourinho's men and reclaiming the league title.

Garcia told City's official website: "That was a big win

This week was a difficult week for us after the two games we lost, but we are focused on the Premier League now and we want the trophy.

"I feel all the team did a great job to keep the clean sheet and it was important for us because we have important players in front of us."