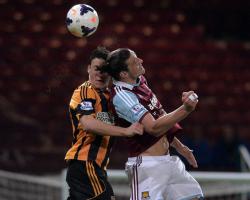 The pair first came up against each other when Chester was at Manchester United's academy and Carroll was playing for Newcastle.

Even then Carroll - now 6ft 4in - was a giant while Chester - at 5ft 10in - is on the small side for a central defender, but the Hull player says he has always been confident of handling the 26-year-old, who is 17 days older than him.

Chester said: "Andy is someone I have played against since I was eight or nine growing up at Man United while he was at Newcastle - he always seems to have been that tall!

"Hopefully I have played against him enough to know how to deal with it.

"On the ground he's no different to anybody else but obviously it's his height that causes the problem, but if you can get close to him and get people around him it's a way of counter-acting that.

"I have played against him for a long time but it's going to be a difficult game as he has been in such great form."

Bruce said: "I don't think I have ever had it so bad

We lost (Robert) Snodgrass 22 minutes into the first game of the season and we haven't seen him since.

It is frustrating, though I have to tell you."

Hull are third from bottom and the trip to seventh-placed West Ham will see Bruce come up against his old friend Sam Allardyce - the pair are so close they even go on family holidays together.

Bruce said he has been bemused by the treatment handed out to Allardyce - even by West Ham fans - and criticism of his management style.

He said: "They were in our position last year and there were lots of calls for Sam in the summer and - I can say this as he's one of my mates - he has proved again what a really good manager he is.

"You get labelled some times and tagged with something

I think he has been pigeon-holed and it is a bit unfair.

"Andy Carroll getting fit has given them a huge boost

They look a really, really good outfit and I watched the game against Everton which was a classic cup tie.

"There was one time point where Andy Carroll went down and I don't really wish him bad luck but I thought 'are you thought going to stay down?'

You don't really want that on any player but it can give you a hand now and then...

but being serious they are a really good side and we are going to have to be at our best."

Sone Aluko and Gaston Ramirez returned to training on Friday and they look to be Bruce's best hope of solving his striker crisis if they can prove their fitness.