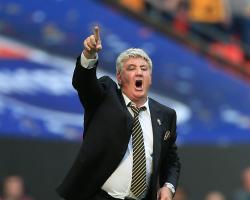 There had long been speculation surrounding whether boss Bruce would remain at the club beyond the end of last season or in the event that owner Assem Allam is bought out.

Reports have also suggested he is interested in succeeding Roy Hodgson as England's new manager, but he told Hull's official website, hullcityafc.net: "I am looking forward to joining up with my players and staff in Portugal next week for our pre-season training camp.

"Despite the talk of potential takeovers, my focus is on what happens on the pitch and as far as I am concerned it is business as usual.

It is simply not correct that I have been told I cannot sign any players as reported this week."

Speaking after Hull's Championship play-off final defeat of Sheffield Wednesday in May, Bruce had said: "I don't know if I'm staying myself yet."

On Thursday, however, the 55-year-old said that since that victory he and the board had been preparing for the coming season and that they plan to invest in the club both on and off the pitch.

"Since the play-off final I have been in contact with our board of directors and other officials on a regular basis and I am confident we all understand what we need to do to be ready for the Premier League season ahead of us," said Bruce, who was appointed manager of the Tigers in 2012.

In addition to strengthening, we have also started working on several other projects including alterations at our training ground in Cottingham.

"Preparations for next season have been well under way since we left Wembley in May.

"As supporters we need you now more than ever, let's make the KCOM Stadium a difficult place for teams to come to next season starting with Leicester on the opening weekend."