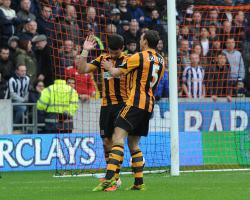 By Bruce's mathematics it leaves his side in search of one more win - which could come on Wednesday night's trip to West Ham - to almost certainly guarantee top-flight status and enable them to concentrate on their upcoming FA Cup semi-final trip to Wembley.

Bruce said: "The one thing we need to do now is see it through and make sure we stay in this division

We are a newly promoted club and the odds were stacked against us.

"We have got to make sure we are here for two, three, four, five years and stay as a Premier League club

That's the aim but it's very difficult, but at the moment we're doing okay."

Long limped off with a suspected knee strain late in the game and will be a doubt for the trip to Upton Park but by then as far as the Baggies were concerned the damage had been done.

The Republic of Ireland always insisted he was reluctant to leave The Hawthorns and new boss Pepe Mel must be rueing the club's decision to let him go with Albion now languishing just three points off the drop zone.

While Long provided the main threat throughout, the visitors failed to threaten despite long periods of neat possession, with their best chance arguably a first minute effort from Stephane Sessegnon which sailed just over the bar.

Graeme Dorrans also brought a good save out of Tigers goalkeeper Allan McGregor as the Baggies looked capable of building on Mel's first win in charge away to fellow strugglers Swansea last week.

But Long was central to the home side wresting control of the game around the half-hour mark, shortly after David Meyler had served warning by flashing a header from a Tom Huddlestone corner inches wide of the mark.

Long's fall under Craig Dawson's innocuous challenge hardly endeared him to the travelling fans, especially when referee Chris Foy indicated a spot-kick which Mel protested and even Bruce conceded was "soft".

Justice seemed to have been done when McGregor guessed right to save from Jelavic but the ball rebounded to Rosenior who headed his first senior goal since October 2009.

Rosenior concurred with his manager's desire to get the job done, telling his club's official website: "There's been a lot talk about the FA Cup recently but the most important thing is we stay in the Premier League.

"We've got a lot of players who have been itching to play in this league for a long time, myself included, and we want to make sure we stay here."

The Baggies ought to have at least narrowed the deficit in a second half they largely controlled, but a powerful header from Victor Anichebe was the closest they went and Long almost piled on the misery with a right-foot effort which came back off the woodwork.

To add to Albion's woes stand-in captain Gareth McAuley limped out with an ankle problem, following Anichebe, who had already departed with a hamstring complaint.

A mounting injury list is the last thing Mel needed going into next Saturday's potentially pivotal home clash with Cardiff, and he admitted: "It is a big problem because the next match is a very big match for us.

We continue because every week in the Premier League the table changes."