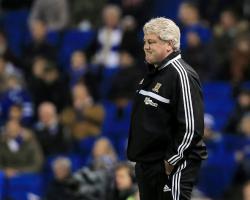 Though the match at the KC Stadium will long be remembered for Newcastle manager Alan Pardew's headbutt on Hull midfielder David Meyler, the overriding memory for Bruce was a catalogue of mistakes which contributed to the humbling reverse - the Tigers' heaviest at home this season.

Moussa Sissoko scored his first of the afternoon after 10 minutes, sweeping home first time after a counter-attack, while Newcastle's second was a gift from Maynor Figueroa, the defender's criminally under-hit back-pass allowing Loic Remy to gallop clear to score into an empty net after rounding the advancing Allan McGregor.

After Hull had pulled one back through Curtis Davis at the start of the second period, Sissoko took the game away from the Tigers again with his second, which came after Hull had needlessly conceded possession from a free-kick, while the home backline appeared ragged and out of position when Vurnon Anita made it four in injury time.

"The one thing we've prided ourselves on at this level is our defence," said Bruce, whose side had conceded just 10 goals in 13 home games in the league before Saturday.

"We've gifted them three goals in my opinion

When you do that it's always going to be a long afternoon and we rightly got punished."

In spite of the one-sided scoreline Hull had more than enough chances to take something from the game, a fact that will give Bruce hope heading into next weekend's FA Cup quarter-final with Sunderland and a home league encounter with title-chasing Manchester City on March 15.

Newcastle's first arrived within seconds of Bruce's son Alex almost opening the scoring at the other end, only to see Tim Krul deny him with a superb double save, while Ahmed Elmohamady should have done better with a first-half header, as should Nikica Jelavic who also struck the frame of the goal from a free-kick.

"I thought we played fantastically well in the first half," Bruce added.

"We've had a great chance, Krul's made two wonderful saves, and within 30 seconds we're 1-0 down.

"Then we've had Jelavic's chance, Elmohamady's chance, Jelavic hits the bar, and then we go and make a mistake (for Newcastle's second goal) like you see on a Sunday morning park pitch

You can't do that at this level.

"It looks like one of those horrible scorelines where we've been well beaten, but anyone who witnessed it knows we haven't."