Bruce keen to think about league 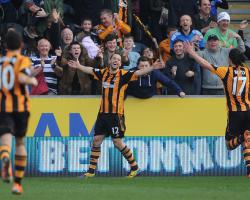 Bruce hailed his players for the manner of Sunday's 3-0 win over Sunderland which booked their place in the semi-finals for the first time in 84 years and guaranteed a trip to Wembley to face Sheffield United.

But he remains well aware that his side still have work to do to retain their place in the top flight and they will head into next Sunday's home clash with Manchester City sitting just five points above the drop zone.

Bruce said: "I still think we've got to win a couple more games.

"We're a newly promoted club and we've made huge strides very quickly but there is still work to do and it carries on.

"We have to get ready to play Manchester City at home

But that's the Premier League - we have to address that and make sure we stay here and get better and better."

City's heroics - fashioned by three goals in 10 second-half minutes from Curtis Davies, David Meyler and Matty Fryatt - came in stark contrast to the Blues' experience as they were dumped out by Wigan at the Etihad Stadium.

Ironically City's defeat may yet prove to be bad news for the Tigers, as an Arsenal-City semi-final would almost certainly have ensured the winners of Hull's clash with the Blades would be guaranteed European football next season.

City midfielder Tom Huddlestone is already relishing his trip to Wembley and says the possibility of going all the way to the final would represent the fulfilment of a childhood dream.

Huddlestone told the club's official website: "I remember watching Wembley finals when I was younger

It would be a dream come true to play in one.

"When you're younger and you're watching those games, you never really feel that you're going to emulate those players but we've got a great chance to do that."

Meanwhile, Sunderland boss Gus Poyet has banned all future talk of cup competitions after his side's abject showing at the KC Stadium.

Having lost the Capital One Cup final to Manchester City the previous week, Poyet made six changes and the result is his side can now focus on the Premier League, where they have slipped back to second-bottom of the table.

Poyet said: "I've been trying to convince everybody that the best way to have confidence in your camp is to win, and it doesn't matter in which competition.

The biggest game of the season is next Saturday and I invite every single fan in Sunderland to fill the stadium and make sure we make it difficult for [Crystal Palace].

"This is the key moment

We will train all week, we will cancel a few days off, and we are going to prepare the best we can then it's up to the players on the pitch and the referee."