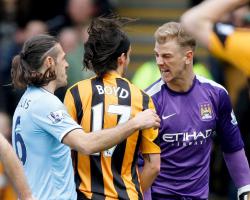 An FA statement said: "Hull City's George Boyd has been charged by the FA following his side's game against Manchester City on March 15, 2014.

"The charge is in relation to an alleged breach of FA Rule E1 [a] in that in or around the 68th minute of the game, Boyd spat at Manchester City's Joe Hart

"Under a new pilot project in Premier League matches this season, if an incident has not been seen by the match officials, a three-man panel of former elite referees will be asked by the FA to review it and advise what, if any action, they believe the match referee should have taken had it been witnessed at the time

"For an FA charge to follow, all three panel members must agree it is a sending-off offence

In this instance, the panel were of the unanimous decision that it was an act of misconduct."

Boyd and Hart became embroiled in a furious exchange after the striker went to ground under the keeper's challenge inside the City area.

Mr Mason waved away his appeals for a penalty as Hart confronted the Tigers man, intimating that he had dived.

The England international was cautioned after the pair clashed heads, but television replays later suggested Boyd had spat during the bust-up.

Hull boss Steve Bruce later defended his player, but the panel of referees decided there was indeed a case to answer.

Hart was booked for his part in the incident and the FA has confirmed that, as the referee saw and dealt with his conduct, he will face no further action.

However Boyd, who was not cautioned at the time, has not been so fortunate and will face a ban should he either plead or be found guilty.