Allams- Weve nothing left to give 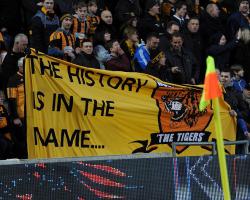 In an open letter published in the Hull Daily Mail, vice-president Ehab Allam said the Barclays Premier League outfit needed to become financially self-sustainable as his family had "nothing left to give" in terms of future financial investment.

Hull's owners, headed by chairman Assem Allam, have ploughed Â£74million into the club since 2010 - an investment that almost certainly warded off a Portsmouth-style meltdown following their relegation from the Premier League in that same year.

The Allams have already changed the company name to Hull City Tigers but they need the permission of the FA Council to change the club's playing name.

A formal application was submitted to the FA in December but the high-profile 'City Till We Die' supporters' group is vehemently opposing the plans, and it is far from certain the governing body will sign off on the proposal.

Ehab Allam's open letter strikes a far more conciliatory tone than some of the past pronouncement of his father - who famously said the City Till We Die members could "die as soon as they want" - but nevertheless underlines the continuing determination of the family.

"We feel that now is the right time to reassure our fans of the reason for the application," the letter read.

"With our family having lived in the area for 40 years, we decided to invest Â£24million of our own money to save the club from liquidation, and probable extinction, in 2010

Since this point we have invested a further Â£50m to get the club into the Premier League.

"We have nothing left to give, and this is the reason why the club has to become financially self-sustainable.

"For the club to become sustainable we need further investment in the form of increased sponsorships and partnerships, and by utilising the global pull of the Premier League this is possible."

Assem Allam previously said he considers a Tigers brand to be more marketable, and the word ''City'' to be ''lousy'' and ''common''.

The letter continued: "Currently there are six teams in the Premier League with 'City' in their name, and, with the exception of Manchester City, all of those clubs are in a similar league position to us, and playing to similar-sized crowds.

"We need something that makes us stand out from the pool of teams we find ourselves in when it comes to attracting potential international sponsors, who are simply hoping to use the Premier League, and its global audience, to advertise.

"We feel the Hull Tigers brand would give us an edge in any negotiations."

And the letter signed off with another warning that the Allam family is prepared to walk away should the name change be blocked.

"We hope the fans understand that we cannot own or run a club where we cannot make the right decisions," it read.

"If we were denied the chance to operate the business in the way we feel fit, and that we firmly believe is in the long-term interests of the club and the fans, then we would have no alternative but to offer the club for sale."