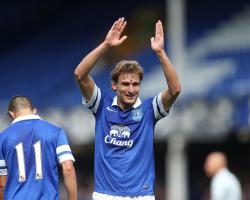 The 28-year-old Jelavic is finalising his move to the KC Stadium after publicly declaring his desire to join the Tigers from Everton, where he has rarely figured in new boss Roberto Martinez's first-team plans.

Allam told Sky Sports News: "He (Jelavic) will sign today - our biggest ever signing. The club is moving forward. We are paying a lot of money for first-class players."

Allam also confirmed the Tigers are closing in on a deal for West Bromwich Albion striker Shane Long, who came within hours of moving to the KC Stadium in September before a last-minute hitch.

He added: "We have agreed terms. It is a matter of getting the club to release and the player to agree."

Allam clearly sees the record signing of Jelavic in particular as a serious statement of intent and there will be many at Goodison Park sorry to see him go.

Jelavic joined Everton in a Â£5.5m deal from Rangers in January 2012 and made an immediate impression, scoring the winner on his full debut against Tottenham and going on to hit 11 goals in 16 games before the end of the season.

But he struggled to maintain his momentum during the following campaign and has found his first-team chances increasingly restricted - although he did score twice in the 4-0 FA Cup win over Queen's Park Rangers earlier this month.

Meanwhile the move for Long appeared harder to finalise with Long admitting this week he would be quite happy to stay with the Baggies.

Long told the Birmingham Mail: "I have always said I'm happy and settled here and I've got family who like living in the area.

"I suppose if a club doesn't want you what's the point in staying?

"It's business at the end of the day and we've got a lot of options up front. If they do want me to go we'll deal with that hurdle when it comes, or if it comes. But at the moment I'm a West Brom player and that's all I'm concentrating on."