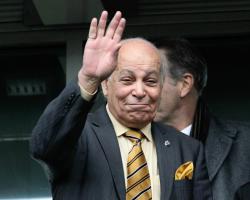 The Football Supporters' Federation (FSF) is carrying out a poll of Hull fans and will send the results of the survey to the FA, which has to sanction any change to the 'playing name'.

An FSF spokesman told Press Association Sport: "This sounds like a rather crude attempt to blackmail the FA.

"Our view is that a club's name is part of the cultural heritage of the club and that it shouldn't be approved by the FA unless it can clearly be shown the majority of the fans agree with it.

"We are polling our Hull City members for their view and we will send the results of that poll to the FA."

The FA Council has to agree to Allam's proposal before a change can take place for next season and FSF chairman Malcolm Clarke has a seat on the council representing fans' groups and Supporters Direct.

Egypt-born businessman Allam says he has lent the club Â£66million and wants the name change because he believes it will boost the brand, especially abroad.

"I'm here to save the club and manage the club for the benefit of the community. It will never, never be the other way round - that the community manage it for me.

"But if the community say go away, I promise to go away within 24 hours."

Allam added that the same applied should his official application to have the club's name changed be rejected by the FA.

He said: "Still the same thing. It's a free country, no two ways about it. Have I ever said something and went back on it? No."