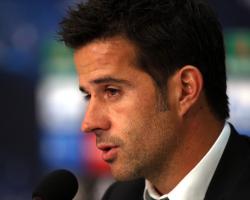 Silva spent most of his 15-year playing career as a defender in Portugal's lower divisions, but quickly made his name in his first coaching job, steering Estoril to promotion to the Primeira Liga in 2012 for the first time in seven years

Estoril finished fifth and qualified for the Europa League in their first season back in the top flight and after guiding them to fourth place the following season, Silva left the club to become coach of Sporting.

During Silva's third campaign with Estoril, the club became the first visitors to win a league game at Porto in six years when they won 1-0 at Estadio do Dragao in February 2014

The previous club to have achieved the feat were Leixoes in 2008.

His dismissal paved the way for Sporting's controversial appointment of Jorge Jesus, who had previously been in charge at city rivals Benfica.

In July 2015, Silva was appointed as coach at Olympiakos and in his sole season at the Greek club steered them to a sixth straight league title with six games to spare

During that success, Olympiakos won 17 consecutive matches, but Silva resigned at the end of the season, citing personal reasons for his departure.

Jose Mourinho described Silva as "a kid friend" in November 2015

Ahead of Arsenal's Champions League clash with Olympiakos, Mourinho said: "They (Arsenal) are in a group where a kid friend of mine, Marco Silva, is the manager of Olympiakos

It would be fantastic for the kid's career to go through, so I have to be honest and say that I would like the kid and Olympiakos to go on."